In my last blog, I had mentioned about my stay at the beautiful Taj Lake Palace in Udaipur. Today, I am going to share with you some things to do and must visit places to see in Udaipur!

HOW TO GET THERE?

FLIGHT: Udaipur has an airport and has connecting/ direct flights flying from major cities in India. It is a good option if you wish to reach quickly.

TRAIN: Daily trains to Udaipur are available, it is an easy and affordable option.

ROAD: If you’re looking for a journey of 10-12 hours from Delhi,

then you could reach Udaipur by road as well.

There are cab services available in Udaipur to travel inside the city.

Udaipur has abundant resorts, palaces and hotels to pick from and it is understandable if anyone gets confused. You can choose to stay in luxury or also find budget friendly options in the city.

My top three picks would be:

Udaipur has a tropical climate. The three main seasons in Udaipur are -summer, monsoon and winter. Summers are scorching hot but winters are pleasant. Please google the weather during your travel. Best time to visit Udaipur is between September- March.

As travellers we want to eat the most amazing delicacies that a place has to offer. The state of Rajasthan is known for its rich, creamy and heavy food. Make sure you exercise post your visit to Udaipur. The delicious food sure has a lot of calories (but hey, the calories don’t count during a vacation, right?)

The most famous food in Udaipur is dal (boiled lentils with spices), bati ( wheat rolled into dough either fried or baked), churma ( crushed wheat with ghee and sugar), Gatte ki sabzi ( Gatte are cooked gram flour dumplings in a spicy curd gravy) and sangri ki sabzi.

Lal Maas( mutton curry) is a signature Rajasthani dish prepared in a gravy of hot spices and yoghurt.

While travelling in Udaipur you will spot sugar cane juice vendors everywhere. It is the best and the healhtiest  thing to have while touring during summers. It is loaded with nutrition. 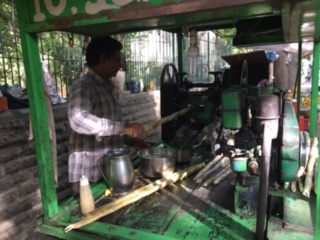 There is a lot to do for tourists in Udaipur. Below are the must visit places: